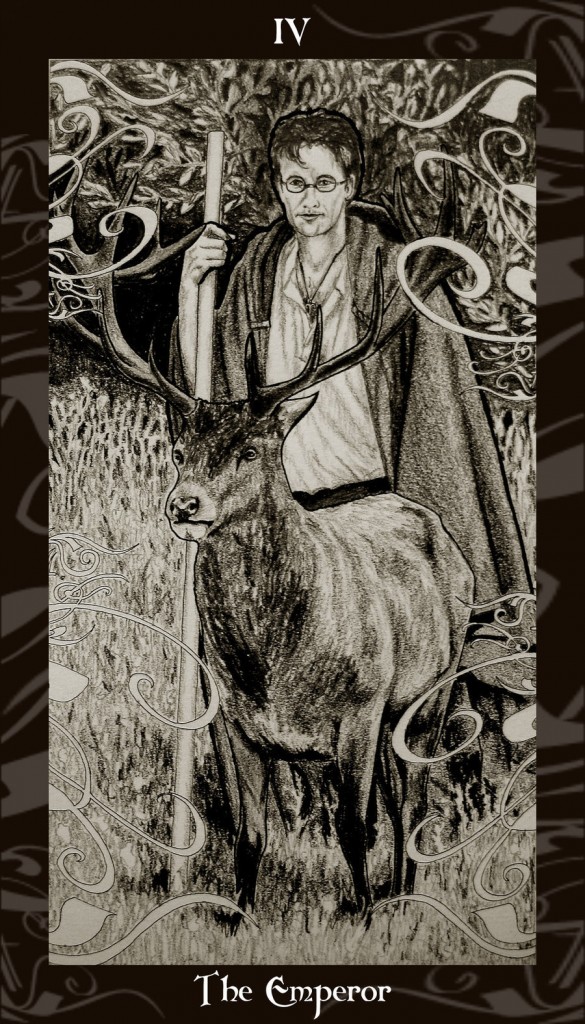 The principle of patriarchy, male rule and fatherhood, force of life, realization of power, god-father, victory of man over nature through inventiveness and science, structure and order, logical thinking, naming and understanding the world, analysis as the basis for action, reason, aggression

As a card the Emperor signifies the male order of things. It stands for civilization, laws and rules of society, science and research that cures and improves mankind’s lot, the willingness to take the lead, to take responsibility, to provide and to keep the weak ones safe are also attributes of this card. In a spread the card signifies that we are ready to achieve status and authority or to take the lead in a new project, but also that we are somewhat wary of our emotions and more likely to trust our intellect.

The Emperor and Empress work best when they are in harmony, when they respect each other’s strengths and weaknesses and support each other. The Empress out of control is tsunamis and earthquakes, the natural world grinding us into the ground to reshape mankind into the next experiment of evolution without regard for intelligence, beauty or emotion. The Emperor out of control is polluted air, radioactive waste, the intricacies of science abused to kill the earth and other people for the illusion of absolute power and control.

Arcana 3 and 4, the Empress and the Emperor, stand for the archetypes of mother and father. So from Harry’s perspective I decided they’d have to be Lily and James. James is shown with his animagus form, the stag, seeing that that ability of his had so much influence throughout the story, by determining both Harry’s and ultimately through Lily even Snape’s patronus. I wanted to contrast his surroundings from those of Lily by showing her in a form of domesticated nature in a garden, and his out in the wild of the forest.