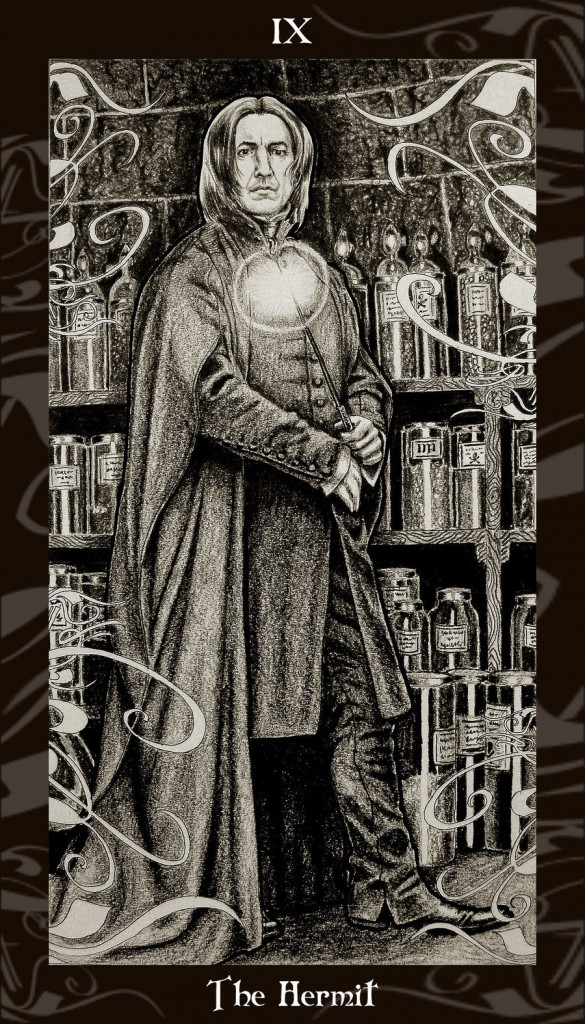 The principle of introspection and personal integrity, the wise man and counselor, retreat from life, inner illumination, solitude, the depth of winter, silence, isolation, self-awareness, being at peace with oneself, withdrawal without outward achievement.

Traditionally the Hermit is on a lonely path, holding a staff and a lantern and walking through a lonely landscape of rugged mountains in the night. The Hermit may signify a guardian and mentor on the long dark passages in life, someone who shines a light for us, even on the things we don’t want to see about ourselves or on the secret fears we have. The Hermit may also mean that we close ourselves off from others, that we march to the beat of our own drum and that we stand alone, which does not necessarily mean that we feel lonely.

Snape fulfils both meanings of the card – he is essentially in a league of his own, blending in neither with the Order members, nor counting himself among the Death Eaters. He keeps his own counsel and does not reveal much about himself. For Harry he is also a mentor and guardian, not one who teaches with kindness, like Dumbledore or Sirius, but someone who has harsh lessons in humility, who shows Harry things about himself (and his father) that he does not want to know and to recognize. But when it comes to the crunch, he will always try to keep him safe.